Most people experience a short term episode of sadness, hopelessness or frustration at least once in their lifetime as a normal and human reaction to challenges and extraordinary happenings. Anxiety by itself belongs to the normal range of human emotions and might be a mere expression of “the blues”. Some people however have to cope with this mental burden even for several years. They worry and fear constantly causing such an overwhelming distress that it interferes with the person’s ability to lead a normal life. This is referred to as anxiety disorder, which is a serious mental illness of the brain.

According to the National Institute of Mental Health anxiety disorders are the most common mental illnesses in the U.S. affecting 18% of the population, whereof women are twice as likely to develop it as men. Anxiety disorders are often accompanied by depressions. "Very often, we find that people have more than one condition – both depression and anxiety disorder" says Charles Goodstein, MD a professor of psychiatry at New York University School of Medicine. In a NIMH funded study researchers proved that more than 40 percent of people suffering from a specific form of anxiety disorder also developed a depression.
You are definitively not alone. Around 5% of the worldwide population are affected by anxiety and depression - a disease that can be easily and successfully cured. Oriental Health can accompany you on your way to ease the mental pain and restore your energy and joy of life.

What Causes Anxiety and Depression?

What Are the Benefits of TCM?

How Does TCM Solve these Mental Problems?

In Western Medicine a combination of psychotherapy and antidepressants are usually prescribed to treat anxiety disorders or depressions. In 2010 antidepressants were the second most commonly prescribed medications in the U.S. However, in most cases it only suppresses the symptoms and can turn into a dangerous toxic medication when used in the wrong place.

TCM practitioners on the contrary believe that physical health conditions are strongly connected to a person’s emotional state and vice versa. Emotions are an integrated part of our organ functions and often the root cause of any disease. The liver is the dominant organ that is responsible for governing our emotions. When too much anger prevails in our daily life, the liver overheats and the qi becomes stagnant. Long term negative emotions also badly influence the interdependent functioning of the heart and the kidney reproductive system. As shown in the Chinese Five Elements Theory the liver is tied to anger, the spleen to excessive worry, the kidney to fear, and the lung with grief and anxiety. A disturbance in one or more of these organs can cause an imbalanced emotional state. A combination of acupuncture and Chinese medicine can help to improve your health condition. The holistic approach of TCM unblocks the liver qi and brings heart and kidney back to harmony.

Acupuncture stimulates the nervous system and releases neurochemical messenger molecules triggering biochemical changes in the body’s homeostatic mechanisms. Those changes support the body’s self healing abilities and promote thereupon physical and emotional well-being. Research (Hui, 2010) has shown that acupuncture treatment significantly benefit anxiety disorders and depression symptoms as specific areas of the brain are stimulated which are known to reduce sensitivity to pain and stress. Acupuncture promotes relaxation of the “analytical brain” which is responsible for anxiety and worry.

Chinese medicine will be prescribed by your body type and customized depending on your health condition. Chinese herbs help your body to restore the balance in your organs and to overcome mental pain. The prescription can be modified, allowing to tailor your treatment to your conditions and needs.

Life’s pressures can get at us in all sorts of ways. By starting with your body and bringing yourself back to balance, you’ll have the strength to deal with anything. Chenpi Tea works to strengthen the digestive system, liberating water from the body and helping to digest excess fat.

Chinese Sleeping Tea contains active herbal ingredients that work to nourish and sooth key internal organs, and regulate the flow of energy. Unlike aggressive sleep-inducing medicines, these natural ingredients work to see you through to the morning, so you can rise with an energized body and a peaceful mind. Getting rested should be effortless- as effortless as making a cup of tea! 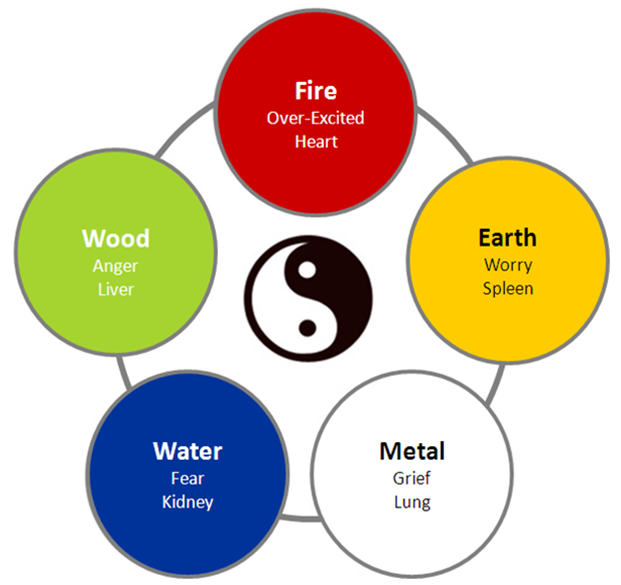 The Chinese Five Elements Theory
The Five Elements Theory contains five categories - wood, fire, earth, metal, and water - each including internal organs, emotions, color, taste, etc. It teaches us how the structures and systems in our body are related and linked to each other, how we are connected to our environment, nature and to greater universe.

What are the symptoms of Anxiety?
Symptoms can be as severe as they interfere with your ability to work, sleep, study, eat, and enjoy life.

Contact us for an appointment with our TCM practitioners