Chinese Medicine maintains that a human body is made up of organs, energy/blood channels (so-called Meridians) and the four basic elements of Essence, Qi, Blood and Body Fluid. Chinese medicine divides the main eleven human organs into two groups: Zang-Organs and Fu-Organs. The theories of Yin-Yang and the Five Elements apply to these organs. 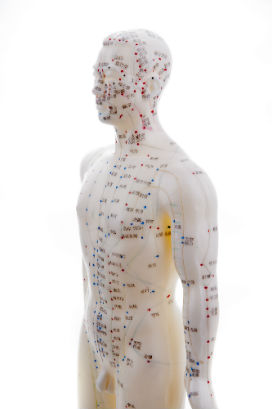 In Chinese Medicine the four basic elements of a human body are Essence, Qi, Blood and Body Fluid. Albeit using different names and terms, the same elements also exist in Western medicine.

When a baby is born, it acquires Essence from the parents. As such the modern Western medicine equivalent is the genetic DNA which is uniquely inherited from the parents. Essence is vital, body-protecting, blood-making and body-fluid-making in the human body. Our body constitution is a result of the quality of genes we obtain.

In Chinese Medicine Qi refers to the life energy of a human being. Life energy is acquired through breathing of air, eating of food and drinking of water, and is required to maintain the physiological functions of a body. A strong and good quality Qi results in a strong human body immune system.

Insufficient or low-quality blood will cause health problems. For example, since the heart is responsible mental activities, lack of blood in it will cause poor concentration, poor memory and dizziness.

Body fluid refers to all body fluids in the human body except blood. It has a similar function to blood, yet it generally provides nutrition to the surface of the human body. It also has moisturizing function. Insufficient Body Fluid will cause health problems such as dry skin, feeling thirsty, or dry lips.

In Chinese Medicine the twelve Jing Meridians are given special attention. They are distributed symmetrically throughout the body, each connect one Zang-Fu Organ and represent either the Yin or Yang force.

Schedule an appointment with our professionals